Showing posts from February, 2013
Show all

I will miss you Mom 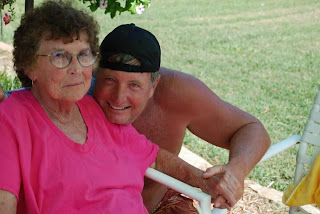 Jean Lossner, 78 of Water Valley passed away Friday, Feb 22, 2013 at the Flo & Phil Hospice House in Jonesboro, Arkansas. Funeral services will be held at St. Stephens Funeral Home in St. Stephens, Alabama on March 2 with Visitation on March 1.

Jean was born and raised in Alabama. After graduating HS, she moved to California where she met her husband of 50+ years. After living in California for several years, they moved to the tropics living on the islands of Guam and Hawaii. Then northward to Minnesota where they lived multiple times over the years. From there she ventured out of the country to Italy for a few years with her family. Eventually, she realized her dream, back to her roots in the South retiring to Arkansas to enjoy for over twenty years.

Born July 27, 1934 in Lamison, Alabama she was the daughter of the late Ernest and Celia (Brooks) Kiker. She was also preceded in death by her Daughter Cheryl England.

2/04/2013 10:13:00 AM
Got on the scale today and good news. After traveling last week and sippn' some good stuff over the weekend, came in a pound lower for my Monday morning weigh in

Got several workouts in and only one day of cardio. Definitely made me appreciate having my own gym! Workout today/tomorrow and out of town for a few days visiting mom. Had hoped to juice it this week but it'll have to wait until I return. Bringing my gear in search of a local gym though!